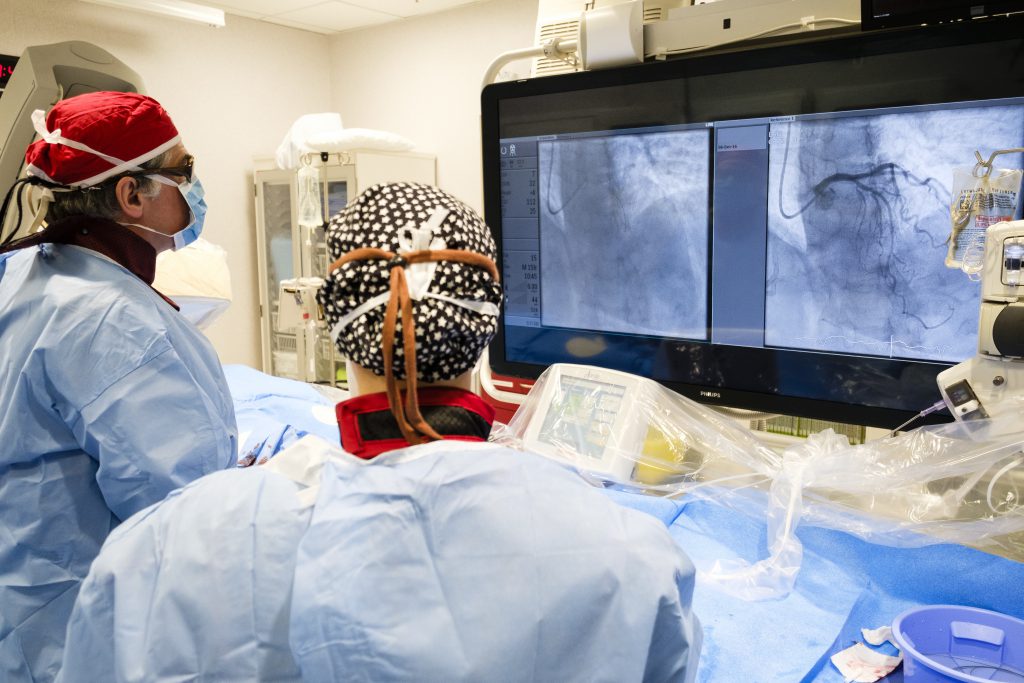 New Westminster, B.C. – {August 27, 2020} – Royal Columbian Hospital remains Canada’s busiest cardiac catheterization lab with among some of the country’s best outcomes, according to the latest indicators from Canadian cardiac centres.

Royal Columbian’s cardiac catheterization lab, as the health region’s emergency room for the heart, performs more angioplasties than any other hospital in the country, according to data released by the Canadian Institute for Health Information (CIHI). Angioplasty is a minimally-invasive procedure involving the use of catheters, balloons and stents to open clogged heart arteries. It is a key treatment for heart attacks.

The outcomes we’re getting are outstanding,” says Dr. Gerald Simkus, an interventional cardiologist at Royal Columbian Hospital who is also the medical director for cardiac sciences in the Fraser Health region. “We have a superb team, highly-dedicated staff. We look after a region that is rapidly approaching 2 million people. The cath lab is truly where we save lives.”

Royal Columbian leads Canada in the number of angioplasties for the second consecutive year, and the hospital has been the busiest in the province each year since the comparisons were first released by CIHI in 2017. With 3,029 angioplasties during the 2018-19 fiscal year, Royal Columbian remains Canada’s busiest cardiac cath lab for this lifesaving procedure.

In addition, Royal Columbian Hospital is one of four centres in the country with statistically superior survival rates following angioplasty. The hospital also sees the highest proportion of high-risk cases in the province, involving patients who have suffered cardiac arrest or shock prior to the cardiac intervention.

“Charitable donors who have received life-saving cardiac care know this is a group of tremendously dedicated and skilled health professionals,” notes Royal Columbian Hospital Foundation President and CEO Jeff Norris. “These grateful patients can take pride in knowing their donations are helping Royal Columbian respond to the highest number of emergency heart attacks in Canada.”

Donor support for cardiac care at Royal Columbian in recent years includes a $3.3 million contribution for a full upgrade of the cath lab’s imaging and monitoring equipment. The upgrade was completed in the fall 2016.

Royal Columbian Hospital’s cardiac program has served patients for more than 50 years. In November 1969, the hospital performed its first ever heart catheterization. Angioplasty and cardiac surgery have been provided at Royal Columbian since 1991, and the hospital serves a population of more than 1.8 million, or a third of all British Columbians, in both those programs.

As BC’s leading critical care hospital, one in three British Columbians rely on Royal Columbian Hospital. This is where BC fights for hope, and for life. We are the only hospital in BC with trauma, cardiac, neurosciences, high-risk maternity and neonatal intensive care on one site. We look after some of the most seriously ill and injured patients, and we do it with the support of donors like you.